There was no grand opening ceremony this season as we were waiting for installation of the new fence as the season started. It was certainly worth the wait though - what a huge positive difference it has made to playing at Page’s Park. And we are not finished with the improvements as yet. We are promised by the Council that the steps to assist safe access to lawn three will be completed shortly - and we are have received a couple of benches from the Council. Some of our gazeboes are nearing the end of their life and we will be looking at replacing them in due course. There are also other ideas in the pipeline to improve our area.

Further details of these events are described in our third newsletter of 2016 which can be accessed below.

Not only Easter Sunday, but also the club’s official Opening Day was carried out by Town Councillor Alan Brandham who has been a great supporter of our club for many years. At 2.00pm, Alan struck the first official ball of the season on a dry and slightly overcast day, to acclamation by members, most smartly dressed in their whites for the occasion. Alan stayed on to play a game with obvious enthusiasm – perhaps we have a future new member – and then partook with all members of a celebratory cake and tea on our Chairman David Ball’s birthday.

Last week on 5th June saw the passing away of Bryan Ferris after a long illness. Bryan was a member of our croquet club until he and Joan moved away to Kent, near to Rochester.

Joan & Bryan are the reason that I am a member of the club; they introduced Caroline to the club, after which Caroline thought I might like another interest.

I played croquet with Bryan many times and always enjoyed his company; he was always so thoughtful, kind and had a terrific sense of humour.

Bryan certainly had his moments on the croquet lawns. My first year at the club when I played in the Club Singles Handicap Tournament, Bryan won all his games in his block, only losing to Len in the Semi-Final.

Joan asked if I could mention his passing to members of our croquet club who might remember him. Florrie & Roy were regular visitors to Bryan & Joan in Kent. Also, John & Judith Cundell had met them whilst on holiday in Tenerife.

The following passage is an entry on Facebook posted by Chrissy Ferris, Bryan's daughter: -

A recent photo of Bryan. 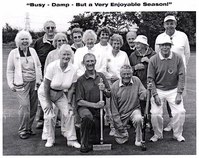 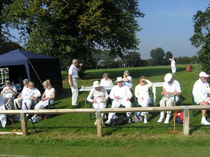 Joan and Bryan in the centre of the picture having a break during a croquet tournament.

Bryan as a young man.

A Club Member Honoured by the Queen 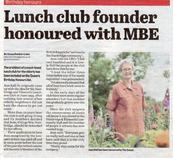 Jean was recently awarded the MBE by the Queen in her birthday honours list for he services to the communities of Stanbridge and Tilsworth.

Jean had been running a Luncheon Club for the elderly in these communities and it is particularly poignant that for many of the elderly it is the only time they get out.

Many members will recall Brian Gillard, our visitor from New Zealand who played at Page’s Park for a couple of months earlier this year. Brian sent John Thorp a couple of pictures of his club at Waikanae. Brian said he had a wonderful time playing croquet LLCC. We are invited to go to New Zealand and play on their lawns.

Following last year’s successful amalgamation of the Garden Party and Fun Day, this season’s date was September 5th at Page’s Park. Unfortunately the weather did not live up to last year’s warm day, however by all reports the cold breezy conditions did little to diminish the overall enjoyment and warmth that was obvious during the day.

Upwards of 50 members and friends came along and enjoyed six hours of convivial fun, croquet and food. The latter was a sit down cold meal with excellent meats, pork pie, salad, followed by some equally fine deserts and a superb cheese board - all beautifully and expertly prepared by Val Jeffers, Jean Ball and Eve Buckingham – with help from Judith Cundell looking after the washing up and other general duties.

There was fun and games on Lawns One and Two led by David Ball and assisted by Peter Cole, whilst John Thorp looked after those who wished to play croquet on Lawn Three – then adding the other two lawns after lunch.

A considerable interest was shown by many of the friends and relations in taking part in the fun games and then being introduced to croquet. We are more than hopeful that this will result in some welcome new members for next season.

Again, an excellent day much enjoyed by all. Thanks are due to many members for helping make this event a great success – in particular the ‘food’ ladies mentioned above – and the hardy souls who erected the marquee and gazebos in wind and rain, set up all the necessary equipment and generally kept things moving along and tidying up at the end of the day.